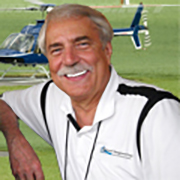 Having an extensive background in both commercial advertising and marketing, the concept for Creative Admark was developed as a result of considerable research, customer feedback and demand by small businesses.

During an earlier tenure as General Manager of Bose Corporation Aviation/ Communications Division, Brad was personally assigned by Dr. Amar Bose, the company founder and Chairman, to coordinate the launch of the worlds first "active noise reduction" headset. Following the successful introduction, Bose was honored with "Product of the Year" on 4 separate occasions, and continues to hold the honor of the "premier noise reduction aviation headset". This recognition continues to solidify Bose Corporation as the world leader in active noise reduction products , in addition to its long standing reputation as the "most respected name in sound".

In connection with the marketing of the Bose ANR Aviation Headset, under Brad's leadership, Bose received a First Place advertising award for Print / Consumer Ad Lead Generation by the New England Direct Marketing Association in which more than 10,000 product inquiries were received in one week following a single advertising campaign titled "Say Again".

Following the launch of the Bose Aviation Headset, in an attempt to further promote the Bose brand, Brad approached two of the premier business aircraft manufacturers, Gulfstream Aerospace and Bombardier, and lead a select group of highly skilled Bose engineers to produce another first, the "Bose Aircraft Cabin Entertainment System", of which was quickly adopted as the premier audio standard for installation in these prestigious business jets.

Brad’s other credentials include: U.S. Army veteran; conferred as a Barron's Fellow in 1999; awarded a Certificate of Excellence by Barron's Who's Who in Global Business and Finance; past member of the MIT Enterprise Forum; past member of the National Defense University; and commercial helicopter and airplane pilot with more than 30 years experience, accumulating more than 12,000 flight hours.

Earlier aviation history set the stage for yet another opportunity with Aero Products Component Services, where he was appointed as the Director of Marketing. During a 16 year tenure, Brad was directly responsible for all marketing aspects of the company which included: direct mail and email campaigns, website builds and SEO management, direct-to-consumer communications, PR copywriting, trade-show planning, execution and management. Other projects include; small and large format graphic design and production, along with audio visual marketing and business presentations.